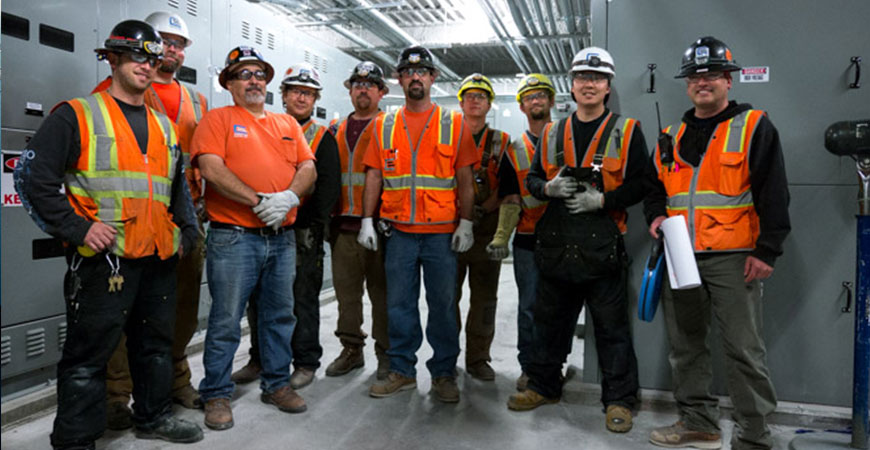 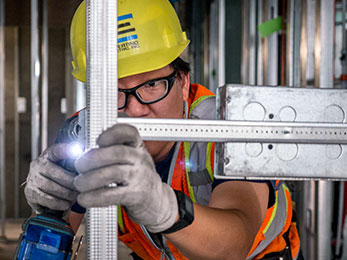 The Lumina towers rising up on Folsom and Main streets across from the Transbay Terminal will consist of 655 luxury condos in four towers ranging from eight to 42 stories high. The Lumina website boasts of “technologically advanced amenities.” Each unit is stocked with a host of Gaggenau and Bosch appliances. This “enlightened living” will take a lot of electrical power, and providing all that electricity to a concrete and glass building is no easy feat. On the Job Site visited with the International Brotherhood of Electrical Workers Local 6, employees of Cupertino Electric, as they proudly took on the challenge. 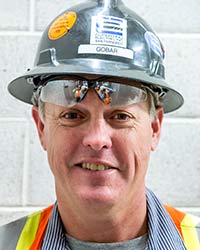 After the decks are constructed, we do the layout. We have a robot that is programmed with all the points. You walk around, and it says move left, move right. Each point has a number and the numbers correspond with a lighting, power, or fire alarm box. Then we nail down the boxes and run pipe between them. We have half a day to do that before the concrete pour. The pours are set up months in advance. The concrete arrives, and you have to make it whether you’re working early or late. You have to have it in the slab and accurate. You can’t help but worry that you missed a pipe or that a pipe got broken or damaged during the pour. We add an extra pipe here and there, and extra sleeves that go through the concrete, so that if you do lose a pipe, you have a secondary way to get around it. You aim to get everything fixed and resolved before the pour, but sometimes it doesn’t happen. Sometimes there are changes in the design. For example, a plumbing pipe has to go here and it can’t go anywhere else, or it could be sheet-metal ductwork. Up front we use a CAD modeling system and try to resolve all those issues, but as you go through the job, things can change and it can have a ripple effect. This guy needs to move 6 inches over and then the next guy moves 6 inches over and the next thing everybody has to move 6 inches over. So you need to do a lot of problem solving. 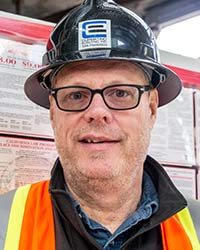 We never used to build concrete this tall, but engineering has changed. Putting up a couple 40-story towers out of concrete requires lots of big infrastructure for power and telecommunications. I have three general foremen under me and then 15 foremen under them, and each one of them has a small crew of a couple journeymen and apprentices. Altogether we have about 50 people. We’ve always put wiring in the concrete. The only difference now is the magnitude of work and the narrow window of time. The most challenging thing is the scheduling and coordination of the job between the different trades and general contractors. We use a computerized layout system where we have a transmitter and receiver and we walk around the deck with it and it finds the points. We used to use a tape measure, but we don’t have the time to do that. It used to take a whole day just to lay out the deck. Now we have less than a half day before they pour the concrete. I went through the apprenticeship program in 1979, then in 1990 worked in management, was general manager of a start-up company, and then in 2008 went back into the field. I really like having my hands in it and having to solve problems of construction. That is more rewarding to me than the sales and other management things. I like being in touch with the guys who are doing the real work. 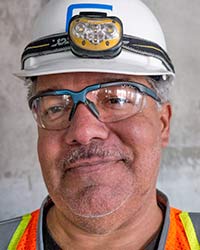 I’ve been in the electrical trade since 1980. I was living in New Orleans and met a girl in Chicago. She knew some electricians and they got me in touch with a business agent in New Orleans. Today we’re running feeders, the flexible armored cable that brings power from the main panels to each of the apartments. These are big wires, but we’re pretty big guys. It’s been fantastic working on this job site. The foremen spent months doing all the coordination and planning before we started so we can work efficiently. All the cables are laid out in an orderly way and we can run them in order through the racks and to each apartment. There are a lot of wires, and we want to make it a clean and neat job. 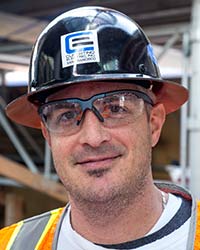 After all the decks are poured we go in and strip out all the boxes and rough everything in between the ceiling and floors. And then when they frame the walls, we rough in the walls. The best part of the trade is the camaraderie. This is my third job with this crew. It doesn’t feel like work, it’s more like working with your friends. Everyone has their own specialty and project they’re responsible for. We count on each other to get things done and to keep each other safe. And when we’re done we feel like we really accomplished something. When we start, there’s just a hole in the ground, and when we’re done, we get to see the final product, beautiful apartments. 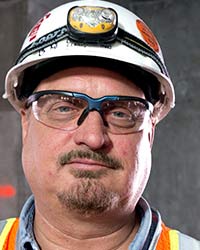 I’ve been in the trade 30 years this month. I’m from Springfield, Missouri, Local 453, but the last 14 years I’ve been out here working in Local 6. They don’t have a lot of high rises in Missouri, and the weather is not this nice. It is all about taking pride in your work and knowing what you’re doing. And that’s where the union comes in. We take 32 hours of training every three years. I just took a class on advanced conduit bending. It really helped on this job. We have to bend 4-inch conduit. You just use a calculator to determine where the bends are going to be and make your mark and line them up in the machine. 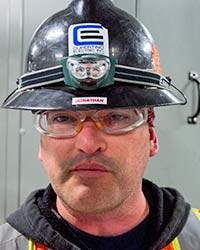 The fire alarm systems are getting more and more complex. On this project we have full smoke control as well. We control every intake, exhaust fan, and damper in all four buildings from this one point. If a toaster starts smoking, the system will open and close the selective dampers and evacuate the smoke. That’s a lot of relays and contacts. Getting all the wires from all four towers to this one central control location can be kind of overwhelming. You have to stay organized. With the help of my crew, hopefully all the lights will turn green when we’re done. 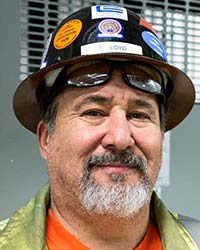 Single-line is all the main power for the building, including the big stuff. We have 12,000 volts coming into the main electric room. From there it feeds seven substations where the voltage is dropped down. Four of those substations are 120/208 volts for residential power and the other three are 480 volts. Two are for the house power, all the mechanical support systems for the building, such as the elevators, heating and ventilation systems, and then one substation is dedicated for the fire pumps. The city wants that on a separate line. In case of a fire they need to be able to pump the water up to higher floors in the building. The city power will only get the water a few stories high. There’s a lot involved when you’re working with 12 kV. You get wires that are larger than a garden hose. We have to call in a special company to make the high voltage terminations. Twelve K is a special animal. You don’t want problems when you’re energizing that type of power, or bad stuff happens. Things blow up, people get hurt. We don’t want that. The way to avoid that is testing, testing, testing, and quality control. We make sure everybody’s on the same page and we make sure everything is good. Right now we are not hooked up to PG&E, so there’s no electricity down here. But once that happens, you’ll see locks on all the switches. I have my lock and all my guys have locks. They put their lock on when they’re working on a circuit, and it doesn’t come off until they’re done and everything is clear. Once that’s done, my lock comes off. And once my lock is off, that means we are ready to go. 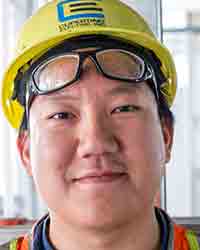 Before this I was an engineer for the defense industry. I was designing things and doing mainly computer work. The work was enjoyable, but I didn’t like dealing with all the bureaucracy and upper management. Now I get to work with my hands and see the fruits of my labor. I install a box and I get to see how it’s nice and square and level and where it belongs. It’s more rewarding. You get an honest day’s pay for an honest day’s work, instead of having to work 10 to 12 hours like I did before. And I’m going to get a pension, which is something few companies will give you anymore. 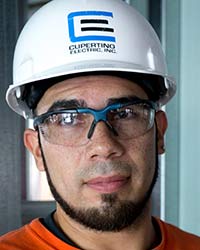 I’m roughing out where the ceiling boxes are going to be and making sure the plumbing or sprinkler pipe or anything else will not be in the way. I mark it on the floor and we use a laser to shoot the mark up to the ceiling.