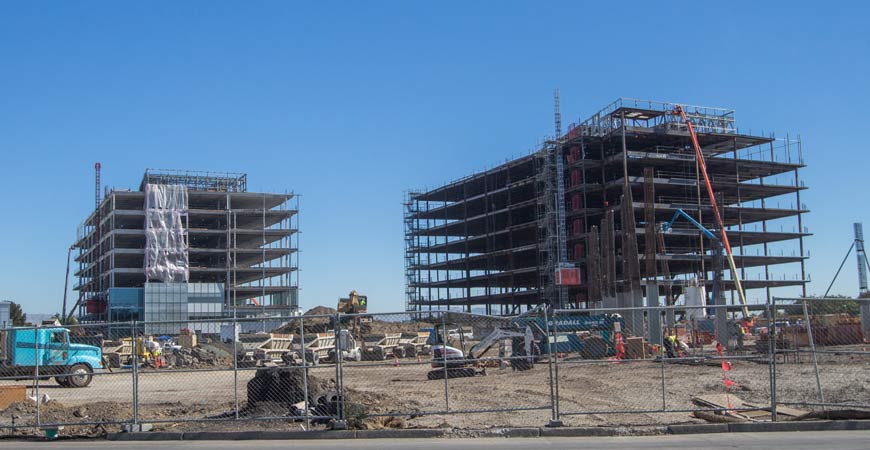 Calibrating and designing a sprinkler system involves lots of calculations and decisions by teams of people working together, from the planning stage to the final tenant improvement stage.

Many people don’t know what a sprinkler fitter does. After all, how many people look up when they walk into a building? Those small sprinkler heads are designed to put out fires before they get going, a good thing for everybody. We’re all glad they are there, even if we don’t notice them. The system is not for looks or comfort. It is there to save lives. 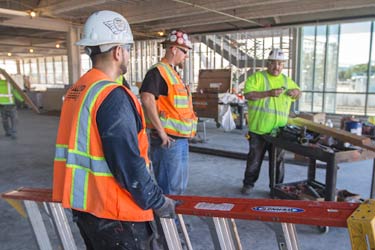 Because they are first on the job, sprinkler fitters have to closely coordinate with all trades to get the water where it needs to go, to hang and install pipes that aren’t in the way of bigger systems coming in later, to deal with egress, or mechanical issues, and all the daily changes to the project. They must consider different wall types, different structures related to other trades, and different beams. Sometimes the plumbing elevation has changed, sometimes the ductwork isn’t where it was originally supposed to be.

Cooperation is a big part of the job. So is flexibility, quick thinking, and problem solving. These are the skills that sprinkler fitters are most proud of.

You can feel the pride of this group of sprinkler fitters from the three-month, First Period Apprentice to the 26-year foreman. Pride in the trade, in the union, but mostly pride in a job well done: “best practice” or nothing at all.

Level 10 Construction is the general contractor for Moffett Place in Sunnyvale. The Sprinkler Fitters are members of Local 483, and work for Allied Fire Protection. 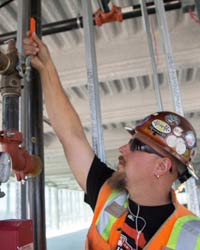 Most of the plans come out and everything is already done, decided as far as location, lights, sprinklers, registers for air, so everything is already preplanned and designed. It looks good on paper, but when you actually get in the field, then you realize everything has changed. The coordinating with all the other foremen on the job, we kind of try to get a good relationship. It’s kind of you scratch my back I’ll scratch your back. It helps to get along with the guys instead of the old mentality of we’re going in first and forget everybody else. It’s kind of like we’re all on the same team. 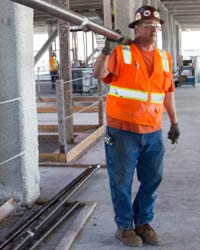 It’s for life safety so everybody can get out of the building without catching on fire and protecting property, that type of thing. We hang main pipes and all the branch lines, all the arm-overs and install the sprinkler heads. Bring the water in from the city, it comes up into a riser into the building and gets distributed throughout all the floors till it gets down to the last head, the last piece of pipe. It’s hard work, it’s pretty rigorous but it’s a future for you and your family. Work is steady, other than the recent downturn in 2008. 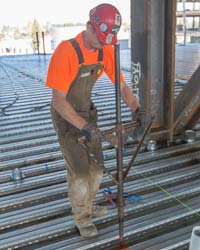 It’s good benefits, good training, usually fairly steady work. It’s a pretty tough job physically. I like working with the guys because it’s a bit of camaraderie. I get specialty projects that the younger guys haven’t ever dealt with. I always enjoy teaching the younger guys how to do stuff right. They’re going to be paying my medical, paying my pension, and contributing just like I am now to the guys who are retired now, so perpetuating the longevity of the union and the financial strength is important. 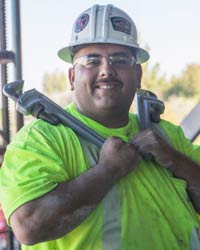 My father is a sprinkler fitter. I’ve been learning all new construction with fire sprinklers – inserting, learning how to control material, put in pipe. There is never a dull moment around here. The union is not only a union, it’s more of a family, and it really doesn’t matter which company you work with, a lot of people are there to help you out and show you different things, which is super nice. Probably the biggest reward of the job is knowing I have a career to build a family off of. 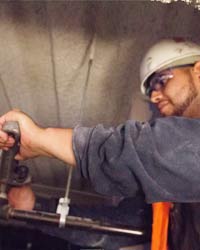 The company I was working was a non-union company and the company went signatory, so everybody that was with that company took the test and got into the union. It was nice because it was a big difference in pay scale and it gave a chance for a brighter future. You got to learn about the entire union thing. Every six months you could get a raise, you got to learn a trade that was pretty cool. I was more of a hands-on person instead of a book person, so the training was excellent. 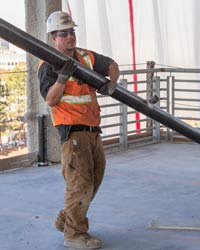 Every day I get to learn new stuff. The pay is great, I go to school once a week and I got a raise every six months, and I love it. It’s a good life-time career. The people on the job help me a lot. They teach me tricks, how to do stuff faster, how to get the job done, safety; because there’s a lot of danger in construction, you know? It’s nice seeing how something grows. Every trade does their own thing and it’s something big, something new. 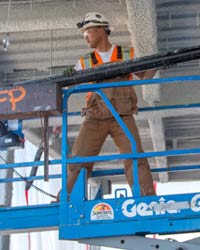 I was introduced into the trade from my cousin. I came from doing water-proofing for about seven years and he told me a lot about the trade. I was working non-union so he said the union was doing a lot for him so I decided to jump on the union side and so far so good. I like where I’m at, I love doing what I do and I know the purpose of what we do is saving lives and that’s pretty much what I look forward to doing every day. 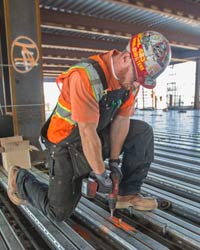 I remember when I first started my foreman taught me to be safe, be punctual, have a good attitude, (be) willing to learn and work hard; so when we get new apprentices I will tell them this is what I expect from you. When I look back at the buildings that I worked on I feel proud because one day the sprinkler systems that I put up will eventually help save lives and property. This is why I chose this trade. 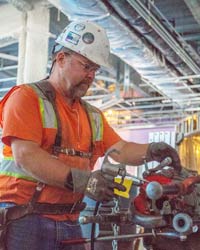 It’s a fun job even though it’s hard work. One of my favorite parts about it is it’s a challenge, its almost like I’m putting together a puzzle every day. Another good part of it is I get to watch something built from the ground up. I love being in a union because it’s like a family. One of the biggest challenges of the job is I’m always learning something new.