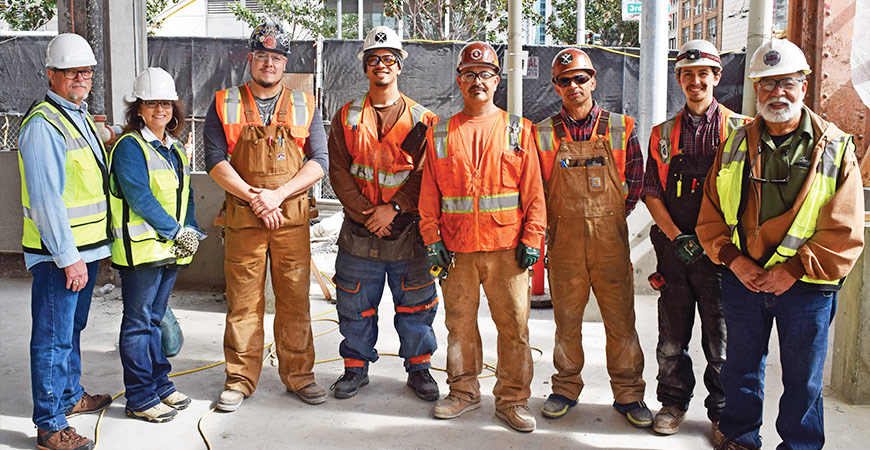 The Sprinklerfitters 483 have kept busy during the past couple of years at 706 Mission Street. The major project involves a historic renovation of two connected buildings that will be the home of The Mexican Museum and The Four Seasons Residences, featuring homes with five-star hotel-like amenities. Some units will be as large as 10,000 square feet with sweeping views of the city and Bay in all directions. The 700,000 square feet site includes a 14-story building and a 48-floor tower containing 146 condo units as well as five stories devoted to the museum. The ground floor includes retail and restaurant space. Webcor is the project’s general contractor.

A team of Sprinklerfitters working for Oakland-based Allied Fire Protection has been skillfully meeting the challenges posed by the project’s 115-year old historic Aronson Building. These challenges include includes working around historical brickwork set for preservation. Crew members reported a pleasant work environment with all the various trades working in sync and superintendents who have been on the ball. Of the 10 Sprinklerfitters who started on the job, and with the work nearing completion, approximately five are left. The project is now in the final stretch with about a month and a half remaining and a final haul of piping and materials recently delivered to the site. 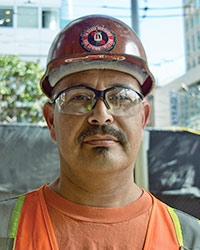 “I’ve been with Local 483 for 20 years. I saw a hiring sign one day and just walked right in. I had been a forklift driver with a warehouse union. Being a member has given me great pay and benefits. The medical is especially important. Everything has been really good. I attend about four union meetings per year. I go because I get to hear about what kind of work may be coming in the future and to just stay informed overall. 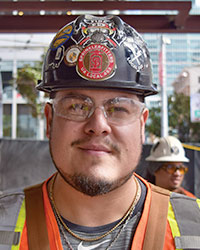 I’ve been with the union for 19 years. I got in when I was 18 years old through a family friend. It was the best move of my life. The overall package that you get for retirement is great and the work is always there. There’s never any doubt that I’m going to stay busy for the year with work. I’m going to build a great retirement with double pension and supplemental. With the union, you’re setting yourself up for life. Joining was the best decision of my life and it’s been an amazing experience. The trade itself is just great work.

We have a very strong union background in my family. Longshoreman, laborers, carpenters, pipefitters — we’ve done it all. I always knew that being part of a union would be the road I’d take. Ever since my apprenticeship was over I’ve been very busy, running big projects with Allied Fire and I am very tied up in with that. So I don’t participate as much as I should, but I hope that’ll change in the future.

Unions have your back. The main focal point is the prevailing wages. You know you’re going to step on the job and get that prevailing wage. There’s no boss messing with you, undercutting your pay. It’s going to be a union-backed project, run the right way with safety on point. That’s the biggest selling point.

I got lucky. I used to work for Junk King, a garbage removal service. I did a house clean out for a guy who had recently passed away. He left behind a union newspaper that had information about all sorts of trades, and I got lucky and found out about Local 483. At the time, I was living in East Palo Alto, and Hayward was right over the bridge. My father is in the Elevators Union and he works for Otis. He had been telling me to get into a trade.

Within the last three and a half years, since I started the apprenticeship, I’ve been able to buy a house in San Francisco, and now I work in the city as well, so I catch BART and bike to work and make some good money to raise my two boys with. Life has been amazing. It’s a blessing. It’s been convenient to have classes on Wednesdays, which is the day they hold meetings, and so I’ve attended some. I’m able to voice my opinion and be a part of things.

Work has been very busy. Instead of picking up garbage with Junk King, I’m doing work that brings me a sense of accomplishment. The brotherhood and sisterhood has been great. It’s a pleasure to be a part of this local. I appreciate everything Stan Smith has been doing for us. I’ve heard work could slow down because of the coronavirus but I’m still here working until that day comes. 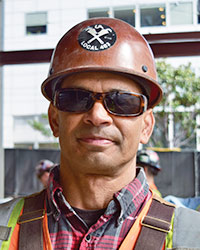 It’s been 30 years since I joined Local 483. I got in because a friend had encouraged me to consider hanging pipe for a living with the Sprinklerfitters. I went and signed up. I’ve always been union and was driving for UPS beforehand. I have a brother who is a union electrician. I couldn’t be more blessed with what Local 483 has done for me because I have two kids in college, and I’ve worked steadily for 30 years with good wages and benefits. It’s been hard work, but it puts food on the plate.

I usually go to meetings especially to vote for president and business manger. They’re also offering the upgrade classes for fitters, so I go in for that as well. The greatest thing about the union is that they fight for your wages. If you go non-union, they can give you any number and you’ve got no leg to stand on. These guys go in, know how much work we have and try to get as much as they can wage-wise and for health benefits. If you have a family, you better have healthcare because if not, how are going to take care of your kids? 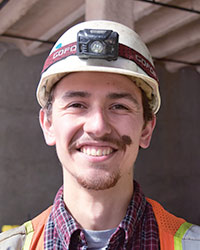 My uncle is in the trade and so he guided me into taking the test and applying. After I had my first kid, I had to find something more sustainable for a career. I didn’t know that much about the trade until I started my first class. I love learning about this stuff and doing the work. It’s a quality program. I just had twins, so things are a little rough right now but I try to get out to meetings when I can. I try to be active because this is our union. We’re all supposed to participate.

Joining this union is the best thing I could have done with my life. You have people looking out for you when you’re not working and will help you get back to work. The benefits are amazing. There are just so many great things. It has provided a steady, reliable income for me especially with three kids. As an apprentice, I do whatever they need me to do, and I’m learning a lot out here.