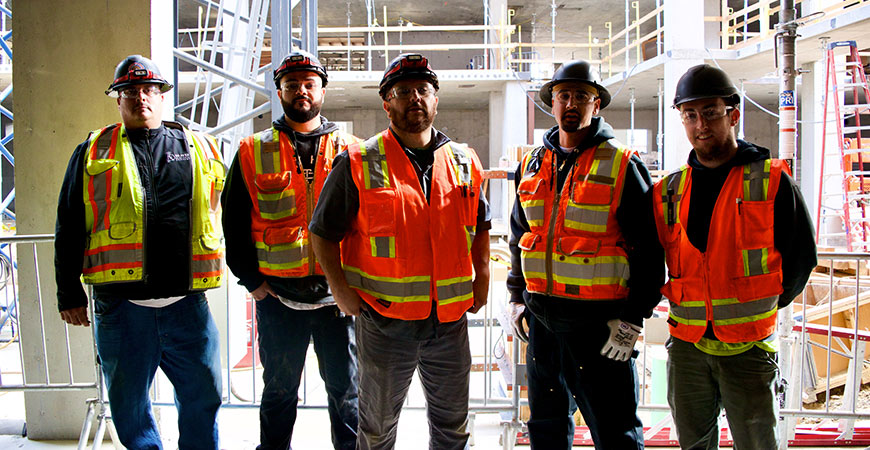 A small IBEW 6 crew, employed by San Francisco Power, has been working on a 100 percent affordable housing project at 1950 Mission Street. Developers BRIDGE HOUSING and Mission Housing, along with General Contractor Swinerton Builders, are delivering 157 apartment units consisting of studio, one, two, and three-bedrooms. Forty of the 157 units are designated for formerly homeless households.

The building will be stocked with amenities including a roof-top garden, courtyard, community room with kitchen, and a bike workshop that will focus on training youth the craft of bike maintenance. Neighborhood-serving retail space will be available for local nonprofits and entrepreneurs. Affordable gallery and work spaces will cater to the Mission District artist community.

The Local 6 crew is in the early stages of powering the building. The first and most important step is getting the gear room established with all the switchgear and necessary equipment in place. Once the electrical backbone is ready, they’ll then run the power to all the sub panels connected to each unit.

San Francisco Power got started doing tenant improvement and service work three years ago and has advanced to new construction. The company recently installed theatrical lighting systems at the new Chase Center Arena and plans for slow steady growth in the industry, focusing on quality over quantity. 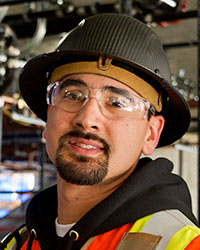 I’ve been a member of IBEW since December 2003. Both of my parents are electricians, both with Local 6. My mom just retired and my dad is an inspector with DBI and is getting ready to retire as well. So I’m just playing the cards I was dealt. I wasn’t pressured into the trade but growing up I always viewed it as an option and gravitated toward it. I wanted to work with both my hands and brain and that’s electrical work.

About three years ago I started the company San Francisco Power. I had always wanted to work for myself and create a good working environment for others. It’s allowed our small crew to earn a decent living, care for our families and have a little fun while we’re at it.

I maintain a good relationship with my union. I was John Doherty’s Apprentice way back when he was still in the field, so we played in the dirt together. Local 6 has always been very helpful any time I have questions about the agreement and what can and can’t be done. I just pick up the phone and call because we always want to do things the right way. 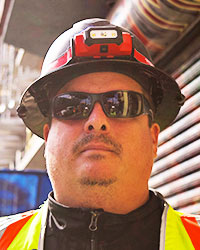 I’ve been with Local 6 for 19 years. I became a Journeyman in 2008 and a Foreman in 2010. I’ve always been active in the union and am an Executive Board member. Being part of a union is the only way to go in my opinion. I have a lot of respect for all workers, non-union and union, but belonging to a union you get better pay, benefits as well as safer conditions on the jobsite.

I didn’t go to college but the union has been my college because it’s like a big fraternity. If someone gets hurt, we pass the hat and raise money. If someone is sick or someone is in need of help for their kid, we’re there for each other. The IBEW brotherhood is unparalleled.

In this trade I’m always learning and I feel like I get better and more confident in my work every year. Even though I’m a veteran in the field, I’m able to learn things from other members as well as pass on my knowledge. 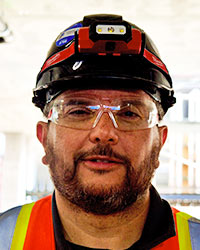 I’ve been with IBEW 6 for over 20 years — my apprenticeship started in 1998. I had been working as a plastic fabricator but because I have family in the trade, they had always encouraged me to join but I put it off until I was 27 when I got my act together. It was the right decision and the right trade. It’s put a roof over our heads and takes care of my family. The union takes care of all the members with retirement plans and all the benefits. Everything is great.

I feel fortunate to be able to work on an affordable housing project. I was born and raised in the city, so I’ve seen a lot of changes. I grew up not too far from here in Noe Valley and used to come to the Mission with my mom as a kid. I’ve witnessed all the gentrification that’s happened and so it feels good to be a part of this project. 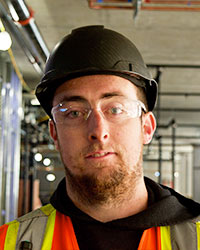 I’m a fifth-year apprentice and have been on a number of different jobsites, learning new things. I have a couple family members in the trade and they said it has been a good trade for them, so I applied just over five years ago and got in. It’s definitely a good trade to be in.

I make it out to meetings whenever I can; it can be hard when I have class two nights a week, but it’s definitely worthwhile when the schedule permits. It’s an opportunity to learn about all the different things going on in the union whether it be upcoming events or issues on the jobsite that need to be discussed. Local 6 is doing a great job of taking care of its members. The wages are really good right now. The benefits are much better than non-union. 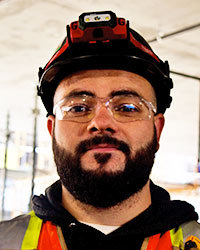 It’s been 16 years since I joined Local 6. I got in right out of high school. I was getting ready to go to San Francisco State when my uncle who’s in Local 6 encouraged me to join the union because I wasn’t that interested in going to school. My dad was a fire inspector and also steered me toward IBEW. I’ve had friends who’ve gone to college and ended up getting in the union afterwards or guys who went to college, got the office job and just aren’t happy. I love being out here in the field.

I try and attend meetings as often as I can. I was more active when I lived in the city, but because it’s so expensive to live here now, I’m out in the East Bay. I keep in close contact with the membership and have my finger on the pulse of the union.