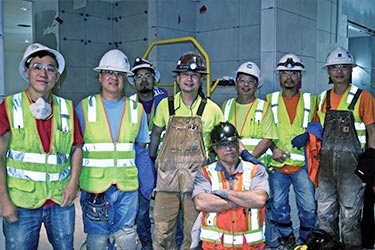 With the final efforts to complete the Chase Center in time for the 2019-20 NBA season underway, a multitude of Bricklayers, Tilelayers & Allied Craftworkers with Local 3 have been scattered all over the arena engaged in every phase of the stone-setting and tile-setting processes for staircases, entryways, open floor areas, bathrooms, locker rooms and more. Many have been putting in long days to meet the tight schedule even during San Francisco’s record breaking heatwave. In addition to ensuring that all workers are aware of how to recognize and prevent heat exhaustion, general contractor, Clark Construction, has delivered pallets of free water to help everyone stay hydrated.

Work on the Chase Center has reportedly been challenging due to the scores of workers from various trades hustling to make their respective deadlines. Despite the sometimes chaotic environment, a special focus on safety has marked the work done at Chase Center, with every company on deck having their own designated safety personnel — a change that was lauded by many Bricklayers. 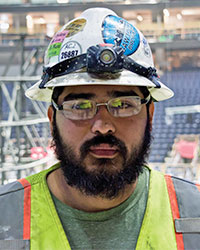 I’m a second-year apprentice marble-mason. I originally started out with Local 1 in Oregon and one of the guys I used to work with came out to work on Apple’s Cupertino campus. I ended up coming out too and never left. I’m originally from Idaho and so it was the weather that sold me as I was tired of the winters. It’s also a steady flow of work — you don’t get much stone work in Idaho like you do here.

I’ve been a union member for two and a half years now. There’s definitely more focus on the worker in Local 3. With Local 1, I only met my union rep the one time when I signed up. At Local 3, Steve is always coming out to the job sites talking to us. They also send us text messages with updates such as meeting schedules.

This job is very safety oriented. They have a field medic, which is great for us. Even if you just have a headache or something minor, you can go to them 24/7. 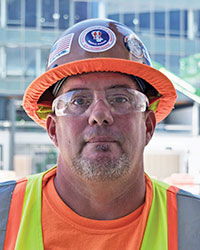 I finished my masonry Apprenticeship and I’m also what they call a Journeyman PCC — Pointer, Cleaner, Caulker in the same union. I joined Local 3 in 1996. It’s like family. I call the hall and they know who I am. They go out of their way to help you if there’s an issue on the job. There are times when I need that help and they respond quickly. They are there for us.

I think the wages and benefits are great. The schooling and proper training helps us get to where we are today, and of course there’s always something new to learn. My uncle, cousin and brother are in Local 3 as well. We just keeping brining in more family and that’s how it’s done.

On this job we’re putting in one piece at a time and have to make constant adjustments. We can be fighting with a little corner for half the day and once it’s done, we continue on. Sometimes it’s the first piece that’s the hardest. 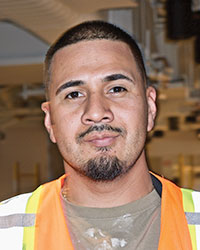 I’ve been an apprentice for a year and a half now. My brother got me into Local 3; he was the first member of my family to join a union. We’re immigrants from Mexico, so this was a good job for us with decent wages. The money is better when you’re union, which is a big incentive, plus there are more opportunities to gain more skills. I’d rather do this than anything else. Everyone always wants to earn more money, but I can’t complain.

I’ve been out to a couple chapter meetings, it was mostly old guys there but it was worthwhile because it’s good to stay informed. It’s a good union to join for young guys who don’t want to go to University and get a degree.

What we’re doing is putting in custom-made marble floors. It will look very nice in the end. This is an under appreciated trade because people just walk on it without understanding the amount of work and skill that went into making it. 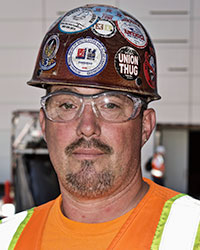 I’ve been an apprentice for a year and a half. I’ve been in the trade since 1994, starting off as a marble-finisher, and then I decided to advance my knowledge and craftsmanship, so that’s what’s brought me to the Apprenticeship program. I did an Apprenticeship back in the 90s as a marble-finisher and now I’m doing it as a mason. My family has been with Local 3 for three generations. The work as a finisher is more demanding but you use more of your brain as a mason. It’s a lot more technical.

I try to make it out to meetings because there’s so much good information, not only about Local 3 but also about what’s happening in the other union trades as well. 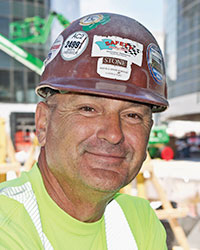 I’ve been with Local 3 for two and half years now. I came here from the East Coast because there’s a lot of stonework out here. I enjoy being a member of Local 3 immensely. It’s a much better union structure than I was accustomed to back East. The leadership is very attentive, there’s a lot of concern for workers. Although health and safety is more of a concern across the board now, our union has taken a much more hands-on approach to it — it’s not just talk, we’re actually walking the walk. One example is that the hammer drill we use has a HEPA vacuum literally attached to it so when you drill a hole it sucks up the dust, so you’re not inhaling it. It’s a major positive.

I’ve been setting stones around the base of all the buildings. It will take a couple more months to complete. It’s challenging because of all the different conditions we’re encountering on this job. 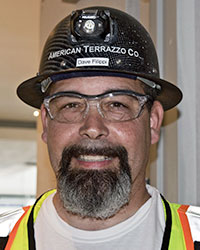 My family has been in this trade for four generations so it’s in my blood. My grandfather and father have been part of the terrazzo industry and I’m trying to keep that legacy going. I’ve been a member of Local 3 since 1989 and my brother is also in the union.

Being union is advantageous for the men. It gives them a sense of security, they know what to expect and they get paid well. Construction can go in any direction and getting quality guys is key. Our company has been involved with Local 3 since the 1940s or 50s.

This job is about family pride. We’ve worked on the 49ers Stadium, the San Jose Sharks Arena, and now we’re working on the Warriors Arena. This is what we’ve done to help build San Francisco. It’s a family business and we treat our guys like family. 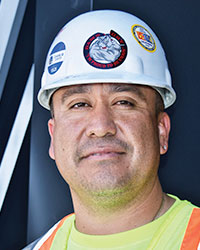 I’ve been a Local 3 Apprentice for a month and ten days, so I’m brand new. My cousin is also with Local 3. I had a driving job before this and was union as well. It’s different being with Local 3 because there’s more education and everything is better overall. I’m very happy with the wages and benefits. The Local definitely advocates for us.

We take classes every few months. When I first started I took an introductory class and got an overview of the trade. This is my very first project as a marble-setter. Every time we set something it needs a fine adjustment, so this is a difficult project. 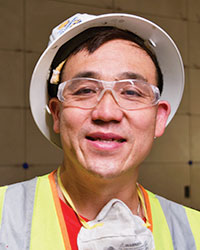 I have 24 years with Local 3. My brother was in the trade too. When I finished college I couldn’t find a job and so my brother brought me in. I like this trade because I get to go to all sorts of different places — a week here and week there — I love to travel. I go to jobs all over the Bay Area and beyond. The farthest I’ve been is Boise, Idaho and have also worked in Reno.

We’re working on the Warriors’ locker room. We’re putting in the tile on the floor first then on the walls. It’s a very big locker room equipped with a large cold bath and hot bath for the athletes’ muscle recovery.