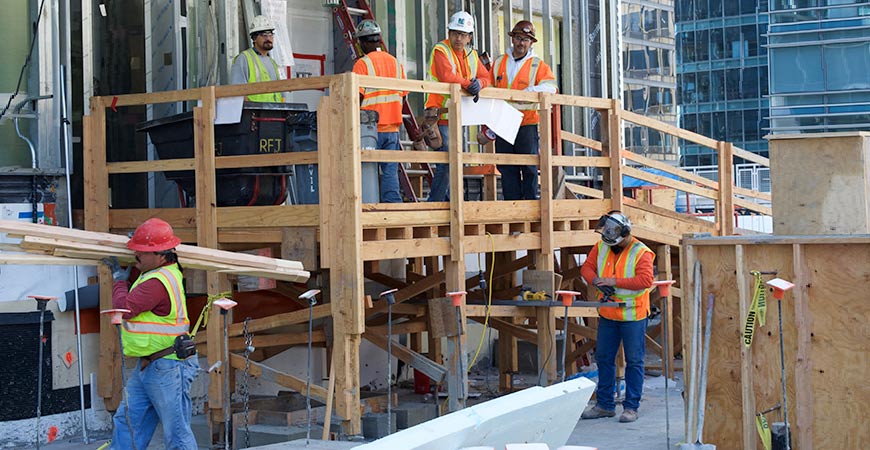 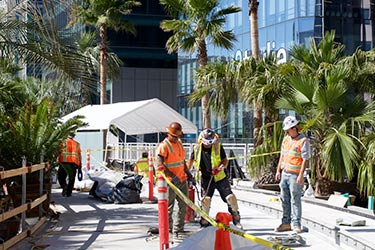 A crew of BAC Local 3 Bricklayers and Tilelayers has been tackling a painstaking masonry job for the Transbay Transit Center Roof Top City Park. The park is an aspect of the first phase of the $4.5 billion Transbay Transit Center project and will feature a 5.4 acre area of greenery and pathways above the transportation hub. In addition to laying stone pathways, the crew has been building walls for the garden areas to get them ready for dirt and planting.

The job follows work done by an array of Local 3 masons in the transit tunnel below the park last year. For the past few novs the crew has been working high above ground, meticulously setting tiny, specially crafted bricks for a pathway that will span the entire 1,400 foot length of the transit hub's roof top park. Local 3 members have stayed focused on the task amidst recent hot weather conditions and a slew of other workers helping to build the expansive park, all while about 800 trees are brought in by crane. The Bricklayers expressed eagerness to see the culmination of their labors — a green "living" roof with a plaza, amphitheater and quiet garden areas for the public to enjoy. 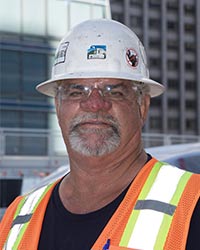 I'm fifth generation, 37 years with the Local. I've been doing this since I was eight years old. I'm on the negotiating committee and have negotiated contracts with them over the last 10 to 15 years. It's been tough times and we've lost a lot of work. The private market is just about all non-Union and we've been taking some steps to try and recapture some of that work.

When I started in the 1970s, everything was Union, every single trade. Now 20 percent is Union and 80 percent is non-Union, and the quality has diminished. This is hard work that requires knowledge. Our biggest issue is getting young kids involved. The job is hard and you're going to go home tired every day.

We do everything from stone to brick and still build fireplaces. If you're an apprentice with me you're going to learn a lot of things. Companies that only do one thing don't foster well-rounded apprentices. 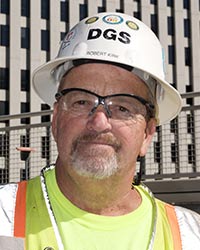 I've been with the Union for 34 years, so I'm one of the old timers. Being a member has helped me put three of my kids through college. I'm married and live in Concord and own two homes, so things have been good. Things have also changed over the years — it's either feast or famine usually, but that's just the nature of the beast. In the Bay Area it can be pretty hard to make it, so I wish that wages were higher.

I've been here a long time, so the job is easy for me. I can teach the trade to the apprentices and journeymen who haven't been around as long as me. It keeps me active at my age and it's rewarding to be the liaison between the worker bees and management. 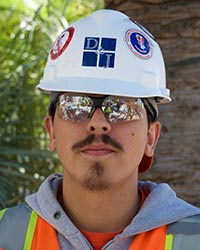 The Local 3 is amazing, it's a very good Union. I got involved because my mother has been with the Local for eight years now. They give me the opportunity to work at different locations, on different types of jobs. Even though they know that I'm an apprentice they still bring me on the job, just like everyone else. The fact that they seek me out for jobs makes me feel more confident about my work.

This is different compared to everything else I've worked on because it's dealing with stone. I usually work with tile and marble. So far, the hardest thing has been getting up at five in the morning. 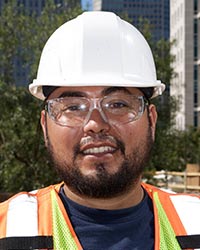 I've been with the Union for five or six years and things have been really good so far. I started out with the Carpenters Union when I was 18 and lived in Fresno, but then switched to the Bricklayers. They treat us very well.

I started on this job recently and will keep going until we're done. We're laying stones and have to make sure that they're even and straight. It's difficult because the stones themselves aren't straight and have imperfections, but you gotta work with what you've got. This is going to be an eye catcher so we have to make it look as best as we can. 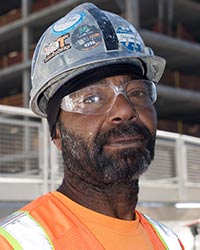 I joined in 1999. My father is a retired bricklayer, so I kinda grew up around the trade and as a kid I would help him on weekends. I went and did other things but eventually ended up coming back to this work. I've been pretty steady in work over the years other than the one period in 2008. It's been a blessing; the Union has definitely treated me well.

This job is challenging but nothing's easy so you gotta just put your head down and get to work. In some aspects it's a tougher job than others I've worked on. It can be a bit more challenging, but it's going well and it's closer to home for me. 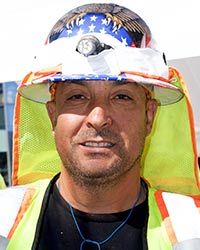 I've been here almost 18 years and I'm happy with things. Sometimes I go to meetings and sometimes I don't, but I'm happy. People complain about this and that but I lived in Portugal on the small island of São Jorge for 32 years, and over there nobody looks out for you and you have to make your own way step by step. I'm very happy here and I go to meetings sometimes, but I never complain.

I've worked on a lot of big jobs and this is a really great project. I've been on this for almost four months and it's very organized. It's good work and everybody helps and respects each other. 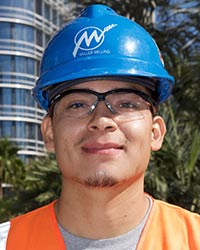 Working in this trade has been such a great experience so far, the Union really takes care of us. I would love to continue on with the Bricklayers. I love helping out and knowing that I'm making something that someone will be walking on soon.

I've been prepping the bricks and making sure they're nice and neat so that it makes things easier for the setters. It's a pretty big project here, bigger than others I've worked on. Most of my experience is in home remodeling. This is really helping me to develop my skills and has taught me that you're never too wise to learn something new. 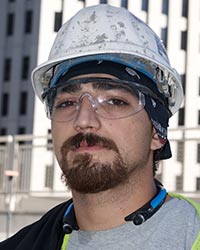 I really like this trade. It's hard work with good pay. I got into it by chance through a friend. I talked to a few people and got my foot in the door. I anticipate that this will be a long term career path for me.