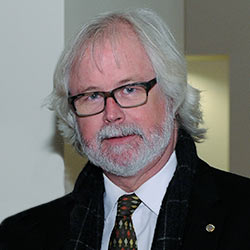 A Journeyman Tilesetter since 1981, Tim Paulson previously served as Vice President of the SFBCTC starting in 1997. He was a principal officer and business agent for the Bricklayers, Tilelayers, and Allied Craftworkers Local 3, and an Apprenticeship Coordinator for the Northern California Tilelayers and Tile Finishers Joint Apprenticeship and Training Committee. As the Executive Director of the San Francisco Labor Council from 2004 to 2018, Paulson coordinated political activities, organized events and rallies, and supported affiliated unions in bargaining and contract negotiations. Prior to working for the SF Labor Council, Paulson worked as the Political Director and Assistant Executive Officer of the San Mateo County Central Labor Council. He previously held the position of Organizing and Political Director for SEIU’s Justice for Janitors campaigns in Northern California, and led successful campaigns organizing security officers at Bay Area office buildings. A San Francisco resident, Paulson holds a bachelor’s degree in economics and political science.

On Labor Day, more than 50 rank and file workers and union representatives (including me) got arrested in front of Marriott’s Westin St. Francis hotel. We sat down on the cable car tracks on Powell Street to support Unite Here Local 2 workers. These hotel workers have been on strike and walking pickets lines outside seven hotels ever since. Their unity and diligent solidarity to stay out this long is amazing.

he November election is only days away, and working men and woman have a lot at stake. Many Congressional leaders and our so-called President are trying valiantly to destroy unions and opportunities for good jobs and benefits. The perfect example of these attacks is why we have to vote No on Proposition 6. Proposition 6 mandates that we abandon efforts to fix highways and bridges. Prop 6 (vote NO) is an attack on public safety by eliminating efforts to fix crumbling highways and bridges.

The Building Trades and Labor Council offices on the second floor of the ILWU international headquarters at 1188 Franklin St. are in transition. The San Francisco Labor Council’s new executive director Rudy Gonzalez has moved into my old office. I am working out of an empty office down the hall as I clean out the Building and Construction Trades office down another hallway. The Labor Council’s new campaign director, Kim Tavaglione, is huddled over two laptops in another conference room getting ready for the November election.

Committed to Standing Together

Washington, D.C. is muggy and hot in August. Getting off the plane at Reagan International Airport is like stepping into a gas furnace. And I am not making a metaphor about the anti-worker, anti-union politics of Ronald Reagan or our current President.